History of the SPC

School Sisters, were founded in 1696. The 17th century was a time of great change and unrest for France and the rest of the world that went through the Hundred Years War. Levesville was a countryside laid in ruin; the people, burdened with both material and spiritual needs. The ignorance, apathy, and illiteracy of the poor grew at an alarming rate.

Father Chauvet, parish priest of Levesville-la-Chenard, was touched by the poor conditions of his parishioners. Inspired by the Gospel of Jesus Christ, he worked with Marie Anne de Tilly our founder. They gathered a few country girls filled with the

desire to seek God and to serve others by instructing those in need of education and caring for the sick of the small village. These two works of charity have marked our Congregation and have been for over 300 years the mission for which our hearts burn and to which the love of Christ impels us and sends us.

The country girls who responded to the request of Fr. Chauvet and Marie Anne de Tilly lived in one of the village houses at the center of the village belonging to Father Chauvet. Their first chapel was the parish church. Marie Anne de Tilly prepared her young companions for their mission of educating the daughters of the farm laborers and fostering their growth into genuine Christian women, visiting the poor and sick in homes, and serving in the hospices in small communities of two or three Sisters.

Despite the early deaths of the first superior Marie Michau in 1702, Marie Anne de Tilly our founder in 1703, and Father Chauvet our spiritual director in 1710, our humble beginnings flourished. Their deaths, imitating the Paschal Mystery of the

Lord Jesus and of St. Paul, gave great impetus to the further growth and development of our Congregation, for “unless a wheat grain falls to the ground and dies, it remains only a single grain; but if it dies, it yields a rich harvest” (Jn. 12:24).

In 1708, the Sisters were entrusted to the Bishop of Chartres, Monsignor Paul Godet de Marets, who provided them with a house in the St. Maurice suburbs and the name of the Apostle Paul who was to be their patron and their model. Like Paul, the Sisters were to “work zealously so as to make a living from the work of their own hands” and thus be able to serve others gratuitously. The Virgin Mother became their model giving them a renewed incentive to work earnestly to acquire the virtues Mary practiced.

The Congregation grew quickly and spread to many towns and villages on the fertile soil of France. In 1727, the Sisters were invited by Louis XV to the foreign missions of Cayenne in French Guiana, to serve in the school and the hospital. Without hesitation, four Sisters volunteered. It took them four months to get to French 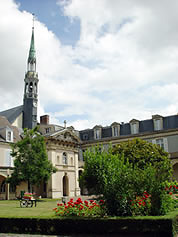 The Congregation was dissolved in France in 1792 due to the French Revolution although we continued to exist in Cayenne in French Guiana. Eleven years later by decree of Napoleon, they were reinstituted in France and a house and land were given to them. This gift of Napoleon remains to this day their Motherhouse. The Congregation resumed its activities of educating and caring for the sick and underprivileged in France and continued in Cayenne, on the Islands of Martinique in 1818 and Guadeloupe in 1820. The year 1848 saw the first foundation in Hong Kong and China. From then to 1930, the foundations spread out into South-East Asia. Then the hour came in 1950 for foundations in Africa and Madagascar, Brazil and Borneo in Indonesia. At the same time, the Congregation extended its frontiers in Europe and North America (Canada and United States). Rome was chosen as the seat of the General Council in 1962.

For centuries this same spirit of Mary Anne de Tilly, which was the love of Christ has impelled the Sisters to leave the world and to give themselves to God for the good of the Church and the service of her neighbor. The Sisters have grown beyond Levesville and Chartres in France, actualizing the vision of Father Chauvet. They now 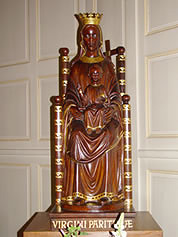 serve the people of all nations caring for the youth, the sick, the shut-ins and the elderly – throughout six continents of the globe. Today the Congregation has almost 4000 members of 28 nationalities and is serving 35 countries in a variety of ways. It’s a long history of Love, written in a mysterious way and hidden in the hearts of thousands of women. 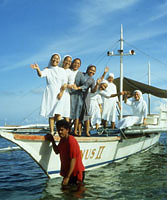 We, the Sisters of St. Paul, are joyful, creative, women, …